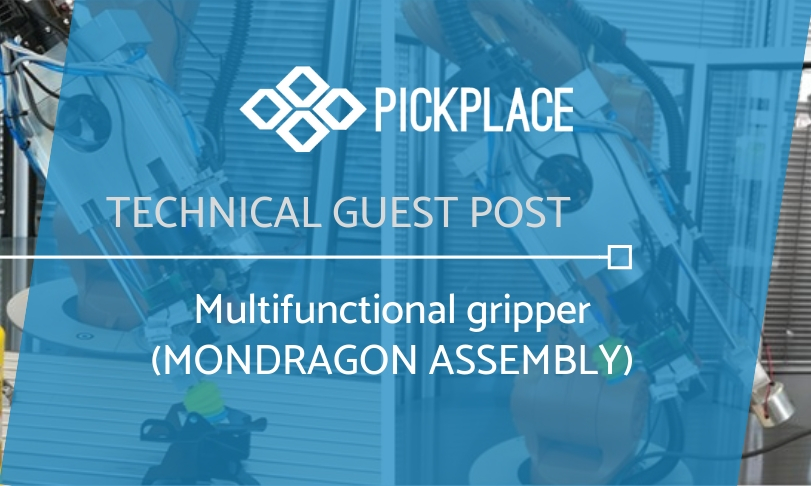 What technologies are necessary to optimize the use of a multifunctional gripper?

The use of bin-picking applications is increasing in the industry. Generally speaking, these applications allow to carry out operations of picking up different products from a box, previously chosen through a vision system.

When picking different products, they can be different in shape, weight and form. To ensure that an object is picked up, a technology capable of dealing with these types of situations is necessary. Which picking technologies are you using for the PICK-PLACE project?

In the PICK-PLACE project a multifunctional gripper with three different picking technologies has been developed. The first of these technologies mentioned is Robotiq’s already industrialized two-finger gripper, the 2F-85. Through this clamp, the picking of the objects by gripping is ensured, although the range of grabbing needs to be greater due to its amplitude when opening the clamps.

The second method mentioned is by suction. A vacuum cup attached to a pneumatic cylinder that can be extended has been used. This technology is suitable for objects with malleable materials, such as plastic bags. The vacuum cup adapts its lips quite well to this type of surfaces and the suction capacity is very high, whereby heavy objects can be caught without problem.

And the last gripping method is the magnet, a simple device that allows the picking of metallic and heavy objects. One of the conditions of the magnet is that it only catches products with flat surfaces.

What control system has been used for the control architecture of the multifunctional gripper?

Figure 3: Control architecture of the gripper.

The control architecture is based on a main file, which will choose the technology that we are going to use, and another lower file which will make the calls to the functions of the elements of the claw, such as the vacuum, magnet and clamp. For the activation of the vacuum and the magnet, these files will make the call to the already created drivers of the controller of the robot, in order to activate the physical inputs and outputs. In contrast, the clamp is an industrial clamp that already has a driver designed for its use in ROS, so it will be used to handle its functions.

What results have you achieved and what conclusions did you get for future modifications of the gripper?

The multifunctional gripper works well and considers all needed grasping capabilities proposed to the user requirements.

The magnet gripper seems to work on a limited set of objects and it has to deal with a couple of problems when it comes to the grasping of versatile objects. It should be considered to be renounced for the next designs, since the multifunctional gripper becomes bulkier at higher weight.

The vacuum gripper provides sufficient suction power to pick and handle most of the objects. From the experiments conducted, the dimensions of the suction cup seem to be suited for the picking and transportation actions.

Experiments with the two-finger gripper have already shown that this gripper is a good choice for picking most of the object very well.

This technical guest post has been contributed by Aitor Alcántara, automation engineer at Mondragon Assembly.