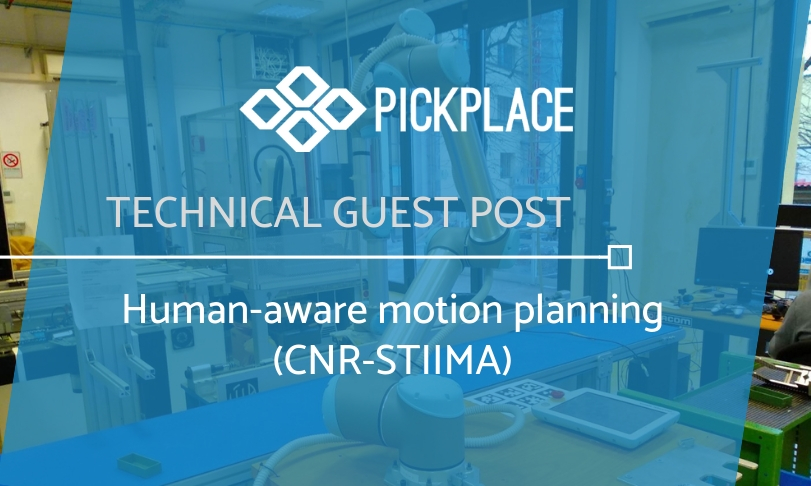 What does human-aware motion planning mean?

In human-robot collaborative cells, one of the main problems is represented by the robot’s stopping or slowing down due to the human presence. The origin of this problem is the lack of awareness of the robot with respect to the human motions. In fact, motion planners take care of the current human position as a mere obstacle or they do not take care of it at all.

The offline human-aware motion planning algorithm aims to compute a robot trajectory for a starting pose to a given goal pose. The planner adds a penalty to the regions of the workspace which are often occupied by the operator. This penalty is an occupancy map where a number between 0 (the human never occupies this region) and 1 (the human always occupies this region) is associated to each workspace region. The goal of the motion planner is to find the shortest path taking into account the occupancy map penalties. The algorithm has to find the optimal solution without requiring high computational times.

The online human-aware motion controller receives the planned trajectory and monitors the distance between the robot and the operator.  The algorithm reduces the velocity depending on the distance. If structural and/or operational redundancies allow the controller to manage a degree-of-freedom, the algorithm deforms the trajectory to keep the robot as far as possible with respect to the human.

What’s the current status and how does your research accomplish progress beyond the state of the art?

The offline human-aware motion planner has been implemented as a MoveIt! plugin and compared with several existing algorithms. It results to be faster and more repeatable with respect to other motion planners. Repeatability is an important requirement, as highlighted by the human factor analysis. In fact, unpredictability bothers operators, resulting in a stress increment.

The online human-aware motion controller has been implemented as a component of ROS Control framework. The controller is based on a novel receding-horizon predictive algorithm. The software computes the speed scaling and the trajectory deformation given the human position with a frequency up to 1kHz.

What’s the hardware and software set-up you’re using? Can the system be used with a different set-up?

The algorithms run in Ubuntu 18.04 machine with ROS (Robotic Operating System) Melodic framework. On a standard laptop, the offline motion planner requires from 0.1 seconds to plan simple motions to 1 second to plan movements in complex cells. The online motion controller runs up to 1kHz. The software does not depend on particular hardware. It requires only information from the vision system about the human position, the way this information is acquired is not important for the software.

This technical guest post has been contributed by Manuel Beschi, researcher at the Institute of Intelligent Industrial Technologies and Systems for Advanced Manufacturing – National Research Council of Italy (CNR-STIIMA).