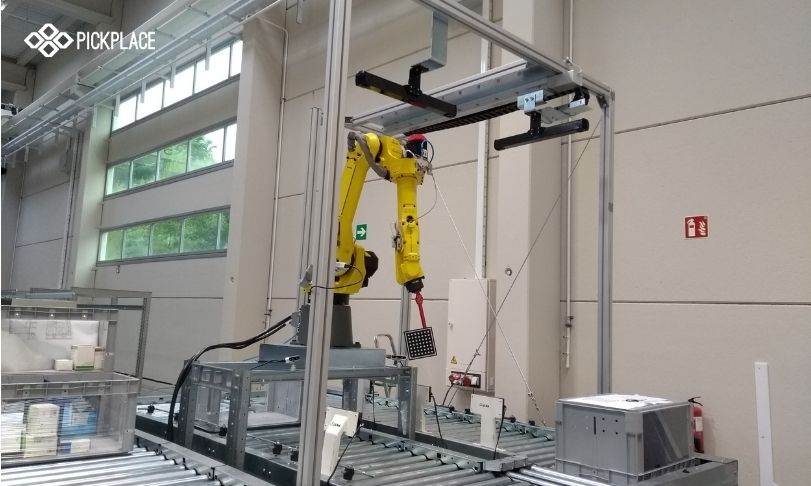 Once the working constraints due to the first COVID-19 wage were over (included the lockdown), PICKPLACE team returned to the ‘normal’ activity. The main task has been the setup of the two pilot scenarios in the project: ULMA and TOFAS.

ULMA Pilot Scenario has been designed to implement the two types of activities that are present in a logistic center, i.e., order preparation and order return management, being the first the most relevant from the industrial point of view and the second the more challenging from the technical perspective.

In this scenario, parts are transported inside plastic boxes that are managed by the SGA, a proprietary software of ULMA to manage the central warehouse. The SGA is in charge of sending the boxes to the preparation area in the proper sequence. The boxes are transported by means of conveyor belts and conveyor rollers.

In the input area, a 3D vision system identifies the pose of parts inside the inbound box and decides which one is the most suitable to be picked by the robot. The main innovation introduced is the ability to handle parts that have not been previously trained or configured. To achieve this objective a deep learning based approach has been developed by TEKNIKER, creating a model that identifies the grasping points of the parts. It also takes into account the different grasping alternatives offered by the multifunctional gripper (MASS) that includes 3 different end-effectors: two finger gripper, suction cup, and magnetic tool.

During the picking operation, sensors embedded in the gripper provide the information required to implement a reactive grasping strategy (FhG-IFF) that allows overcoming minor errors during grasping operations, such as slippage of the handled object and collisions with the objects in the vicinity.

Using as input information the real position of the grasped object with respect to the robot provided by a multicamera system and the free space in the destination boxes that are permanently monitored by means of a 3D vision camera, the SGA calculates the final position where the object must be placed. The algorithm (ULMA) to create the final part mosaic considers not only the free space but other parameters such as the fragility of the object or its geometry.

The order return application introduces as an additional challenge the identification of the part grasped, which is addressed by means of another DL model (TEKNIKER) that is trained over time during the order preparation phase, without human intervention.

The system is fully operative at ULMA facilities and will be used for final tuning and validation of the technologies and concept developed until the end of the project. It is expected to present the results achieved in a public event by the end of April.

The TOFAS scenario answers to the problem of spare parts delivery preparation. Conceptually it is similar to the order return in ULMA scenario. In fact, during the picking operation it is not possible to know the part that has been handled. This verification is done afterwards, once the part is out of the inbound box, using the barcode or QR that identifies all products. Two additional differences with respect to the ULMA scenario are:

This scenario is being setup at TEKNIKER facilities and will be also presented during the final public event.