Robots and cobots in logistics – the next stage of growth – Industry 4.0 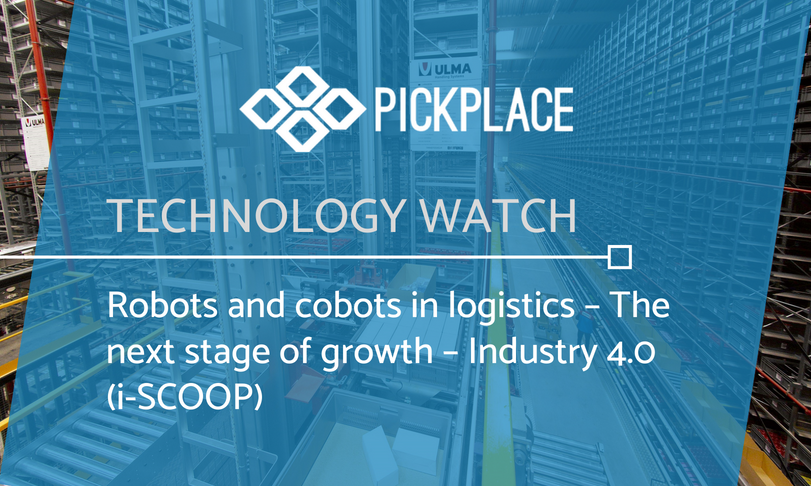 Despite the de facto main attention for IoT when people talk about ‘Industrie 4.0’, many other/related technologies and realities take center stage in Industry 4.0 and Logistics 4.0.

Among them: robotics. Obviously, they are already used a lot in manfacturing and logistics and transportation. However, the market is about to accelerate as research and market evolutions show. Moreover there are ample evolutions, among others regarding the rise of cobots. Robots and cobots in Logistics 4.0 – an overview.

By 2018, 45% of the 200 leading global ecommerce and omni-channel commerce companies will deploy robotics systems in their order fulfilment warehousing and delivery operations (IDC)

Automating warehouses and picking with the use of robots isn’t that easy. It’s not easy as such and hasn’t been easy from the perspective of organizations that looked for a solution to do it. Regarding the latter, we must mention Amazon. When the company looked at ways to further enhance the operational efficiency of its distribution centers, Amazon found a solution with Kiva Systems, a provider of mobile robotic fulfilment systems. In 2012 Amazon coughed up $775 million and acquired Kiva Systems.

The logistics robots and technologies of Kiva Systems were in high demand and several companies, predominantly retailers and e-fulfillment service providers (e-commerce is a key market driver), worked with the company. Until sometime after the acquisition when Amazon announced that it would use Kiva Systems, now known as Amazon Robotics, for its own operations alone. Support for existing customers, of which quite a few already stopped using Kiva Systems and others are about to, has been going on several years after the acquisition and is expected to stop in a few years.

Smart cobots and the growing adoption of robots in logistics and beyond: data and evolutions

Nevertheless, the decision by Amazon left a void and delayed the further development of the logistics robots market. It did take some time for companies to fill that void. Yet, it’s clear that now, over five years later the landscape is about to change and grow rapidly.

You can imagine that five years in ‘technology time’ is pretty long and that in those five years a lot has happened. The market of cobots (collaborative robots) is poised to accelerate very fast and not just in a warehousing, logistics and fulfilment and picking context. Industry 4.0, which has moved beyond manufacturing (where robots and cobots obviously also play a role in, among others, packaging and picking) into logistics and other industries, the IoT (more specifically the Industrial IoT), data analytics, AI and so on are never far away in this evolution.

IDC expects that by 2018 (!) 30 percent of all new robotic deployments will concern smart cobots that operate three times faster than current robots (with ‘current’ being end 2016) and are safe for work around humans

E-commerce, as mentioned plays an important role. As IDC says in the same press release in its worldwide robotics predictions: “By 2018, 45% of the 200 leading global ecommerce and omni-channel commerce companies will deploy robotics systems in their order fulfilment warehousing and delivery operations”.

And there is more: as said, after Amazon’s decision it isn’t as if others have been sitting still. One of the major companies that has been very active in the logistic robots and cobot space is Locus Robotics, which specializes in e-commerce fulfilment solutions with, among others, its own autonomous cobots, LocusBots™.

Locus Robotics is spun out of Quiet Logistics, a third-party e-fulfillment service provider and (former, there is still some Kiva in one warehouse) customer of, indeed, Kiva Systems. Locus Robotics raised $8 Million in May 2016 and is not just coming up with quite some innovations but also new initiatives and, at least as important, ‘deals’.

DHL and robots in logistics – a next step with Locus Robotics

In the Spring of 2017, DHL Supply Chain, not the smallest contract logistics firms around, announced that its starting a pilot with the LocusBots™ cobots. The company is conducting the pilot within the life sciences sector at a facility in Tennessee.

If the pilot, for which several different picking strategies will be tried and the ability of the robots will be assessed in regards with communication with the picker (collaborative robot or cobot approach whereby robot and staff work together) and with the warehouse management system, it’s expected that a further roll-out will take place.

It’s again another sign that the analysts indeed are right and the cobots market is about to significantly accelerate. The void left by Amazon is being filled in by various players such as Locus Robotics and, among others due to lowering costs, clear benefits and evolutions in the used technologies and practices to ensure safe human and robot collaboration, the real ‘robot wars’ are about to start with more vendors getting ready (2016 already saw some important market changes, also on the level of acquisitions).Other factors such as evolutions in e-commerce are obviously also contributing to this.

It’s again another sign that the analysts indeed are right and the cobots market is about to significantly accelerate. The void left by Amazon is being filled in by various players such as Locus Robotics and, among others due to lowering costs, clear benefits and evolutions in the used technologies and practices to ensure safe human and robot collaboration, the real ‘robot wars’ are about to start with more vendors getting ready (2016 already saw some important market changes, also on the level of acquisitions).Other factors such as evolutions in e-commerce are obviously also contributing to this.

The future of robots in logistics: the view of DHL

DHL is an important customer for many reasons, not just the business as such. Several years ago, Deutsche Post DHL, launched a study which looked into potential future scenarios in logistics.

The Logistics 2050 scenario study wasn’t just a way of looking at various specific scenarios in the logistics industry and how they would impact the logistics business but also a strategic exercise. As CEO Frank Appel put it back then: “Only those who think about alternatives can devise robust strategies.”

Such scenario studies, involving several experts and stakeholders and following a clear methodology can be great ways to look at the future potential business scenarios under the motto “we can’t predict the future but we can prepare for it when mapping out potential evolutions”. The study was presented in 2012, roundabout the time Amazon purchased Kiva Systems. It was followed by a broad range of DHL Trend Research in areas from self-driving vehicles to a trend report on, indeed, the usage of robotics in logistics. In other words: DHL has been leading the way in looking at how logistics is and will evolve, also regarding robots in logistics.

If you want a deep dive into the technology trends, applications and future evolutions with regards to robotics in logistics, beyond the mobile piece picking robots, the 2016 report by DHL on the topic is certainly a must-read.

The company is already using robots since quite some time for other purposes, including trailer and container unloading robots as the image from the mentioned robotics in logistics study below shows.

Will Amazon Robotics change its policies and go for a piece of the pie? The company does organize a robotics challenge in the Summer of 2017 (and has organized similar challenges in the past) whereby it aims, quote, ‘to strengthen the ties between the industrial and academic robotic communities and promote shared and open solutions to some of the big problems in unstructured automation’.

Commercially viable automated picking in unstructured environments remains a challenge Amazon Robotics says. We remember ‘open and shared’ solutions. Rumors, however, are that Amazon will stop support for Kiva Systems completely by 2019-2020. The company also has a lot of other experiments going on, such as drone delivery and disrupting the face of logistics in Logistics 4.0.

By 2018, 30% of all new robotic deployments will be smart collaborative robots that operate three times faster than today’s robots (IDC)

In the meantime, Locus Robotics and many others such as 6 River Systems, Fetch Robotics, Magazino and KUKA, to name a few, have clear market opportunities. Expect them to be joined by established players in the robotics and cobots market such as ABB. As usual, along with the market opportunities come challenges to tap into this growing robot market in logistics and beyond, whether it concerns the types of cobots mentioned in this article or any of the other types of cobots and robots in logistics where robotics have an almost natural place given the challenges of the industry.

However, that’s for another article. In the mean time you can check out the report from DHL (PDF opens). Interesting times ahead indeed.