More Robot Picks for Logistics to See at MODEX 2018 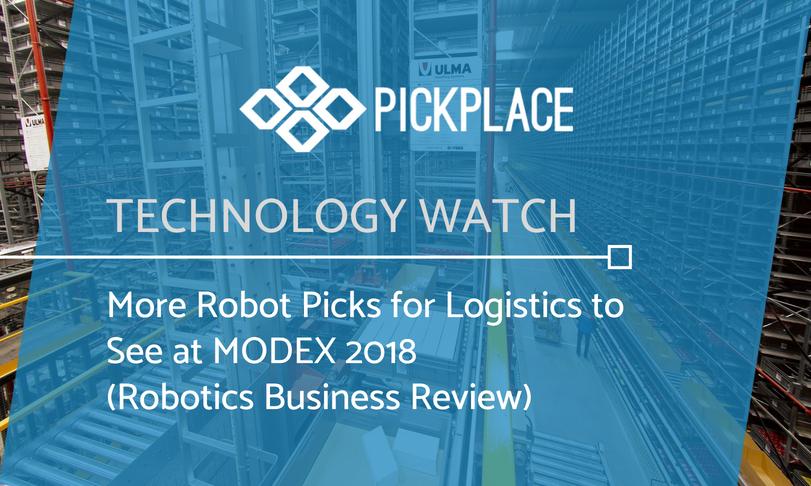 At MODEX 2018, logistics businesses can learn about the latest in cobots, pickers, and autonomous mobile lifts. Here are some robot picks worth checking out.

Warehouse and logistics automation is maturing at a furious pace. We’ve already covered some of the mobile robots and suppliers that will be at MODEX 2018 in Atlanta this week. Let’s look at more exhibits and robot picks that you don’t want to miss at this manufacturing and supply chain show.

Universal Robots to show with partners

Universal Robots S/A will be displaying collaborative robot applications at Booth C2454 with new partners RightHand Robotics and Schmaltz. The demonstrations will show how cobots — the fastest-growing segment of industrial automation — can optimize supply chains in ways traditional industrial robots can’t. Denmark-based Universal Robots is already the cobot market leader, and new applications and partnerships could help it extend that dominance.

The RightHand Robotics workcell will feature a bin-picking demo of its e-commerce fulfillment solution. The Schmaltz demo will feature the new Schmaltz Electric Vacuum Generator, an end-of-arm vacuum source.

The significance of this robot pick shouldn’t be understated. In addition to providing suction for a gripper, the Schmaltz vacuum enables the cobot to be easily moved around the facility and redeployed as needed.

Robot picks have been the Holy Grail of logistics automation for some time. This year, MODEX attendees will be able to see bin picking in operation from two different vendors.

Soft Robotics (Booth B4781): Soft Robotics has launched SuperPick, which it says is the first autonomous soft robot designed specifically for e-commerce and retail logistics environments.

SuperPick combines the power of soft robotics with artificial intelligence to automate highly unstructured tasks such as bin picking, sorting, and order fulfillment. SuperPick is already in use, picking from both heterogeneous and homogeneous bins.

Over the past 12 months, RightHand Robotics has been busy deploying pilot installations and recruiting and training channel partners. Its product is now ready for mass deployment. Typical applications include robot goods-to-person, autobagging, and sorter induction. You can also find RightHand Robotics in four partner booths around MODEX:

Robot picks for storage and retrieval

Automated storage and retrieval systems come in many shapes and sizes. Some people might not consider AS/RS systems to be robotics, but many of them include robots. Several vendors will have AS/RS systems for evaluation at MODEX.

InVia Robotics (Booth B4339): InVia Robotics offers a mobile robot capable of picking totes and boxes off of existing shelving to deliver to picking stations.

OPEX Corp. (Booth B3779): OPEX offers a variety of unique AS/RS solutions and “eaches” pickers in its PerfectPick product line. The company will be showing its PerfectPick in operation at its booth.

On the heavy end of the scale, moving pallets and unit loads around your facility can now be done by autonomous mobile robots and automated lift trucks. Here are some vendors exhibiting autonomous vehicles capable of carrying/moving heavy loads:

Fetch Robotics (Booth B4835): Fetch Robotics is an innovative autonomous mobile robot supplier. The largest vehicle in its lineup, the Fetch Freight1500, can move up to 1500 kg (3,300 lb.). Fetch Robotics also recently released two new models, its CartConnect and RollerTop.

Hyster Robotics (Booths B2921, C1445): Hyster robotic lift trucks will be demonstrating their infrastructure-free navigation and introducing the new virtual reality order-picker simulator, designed to give users an accurate sense of operating a Hyster lift truck. While Hyster has made a name for itself in fork trucks, it is new to the self-driving vehicle market.

OTTO Motors (Booth B3975): OTTO Motors is another autonomous mobile robot provider manufactures and operates self-driving vehicles to automate large material movement inside busy factories and warehouses. The OTTO 1500 can move can move up to 1500 kg.

Seegrid (Booth B1424b): Seegrid is another leader in heavy-payload, self-driving vehicles. Its vehicles have collectively logged over 1 million miles of autonomous driving, making them some of the longest-running solutions on the market.

Vecna Robotics (Booth B4987): Vecna is a mobile robot veteran and is now deploying its robotic pallet trucks and tuggers in facilities all over the world. Its executives will also discuss “AGV Integration and IIoT Strategies to Gain Agility and Competitive Advantage” at the show.

Mike Oitzman / The Market Spec Group was founded to deliver best practices, market insights, and strategic guidance for the industrial automation and service robotics markets. For over 25 years, Mike Oitzman worked for market leading companies such as Adept Technology, Remedy/BMC Software, and Hewlett-Packard. At HP, he helped introduce the first generation of HP’s cloud-based solutions and led the product management team for HP’s largest SaaS solution. Oitzman is a recognized speaker and expert in the “Robots-as-a-Service” and mobile robot markets.