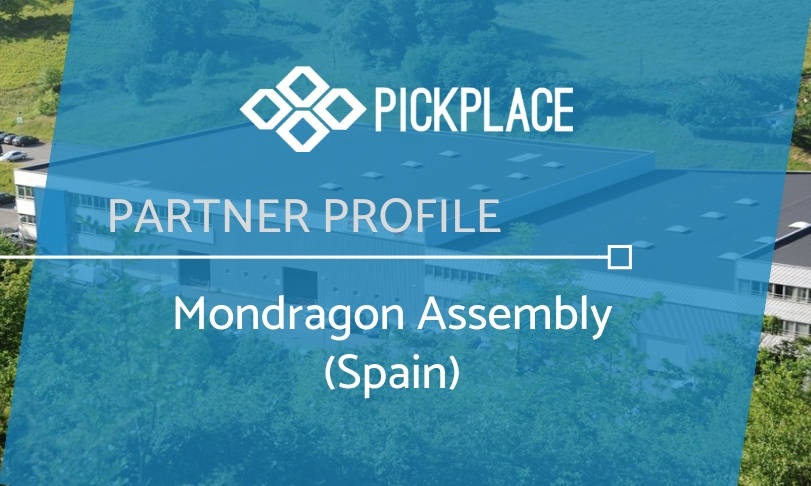 What is Mondragon Assembly?

Mondragon Assembly is an international group specialising in the development of automation and assembly solutions. The parent company in Spain was created in 1977, one of the pioneers in the development of production and assembly technologies. The group currently has six production plants in Spain, Mexico, France, Germany, China and Brazil, and a subsidiary in India with over 400 professionals. Mondragon Assembly also has a strategic network of commercial offices.

The main sectors of activity for Mondragon Assembly are automotive, household appliances, photovoltaic, medical and cosmetic. Machinery developing for these cutting-edge sectors involves a wide range of technologies to be implemented and very precise control-monitoring techniques.

How did you learn about PICK-PLACE and why did you decide to join this project?

Mondragon Assembly was involved with the coordinator ULMA Handling System and IK4-TEKNIKER in a regionally funded project for robotic developments. It was in this context where the coordinator explained the topic of the new project and we almost immediately decided to join the project.

PICK-PLACE project gives Mondragon Assembly the opportunity to learn more about collaborative robotic environments, where human interaction and adaptative robot path planning are developed. It is also an opportunity to design and manufacture a new grasping tool with an optimized strategy, in collaboration with leading European research centres.

In the case of Mondragon Assembly, what’s your main contribution to PICK-PLACE? And your expectations?

From its creation in 1977, Mondragon Assembly has been committed to innovation as a means of achieving growth, dedicating large part of its resources to promote new product research and development, and extending its comprehensive service offering. Additionally, the group has its own technology centre since 2002, aimed at developing and capturing technologies in the medium and long term.

The main contribution of Mondragon Assembly to the project is the know-how that we have in the design and development of tailor-made machines. This knowledge will be use to design and manufacture a new multifunctional gripper.

There are several benefits of participating in the project. Firstly, the development of an advanced gripper that could be used in some of the pick-and-place processes that we integrate in our machines. Additionally, the optimization of the picking process by means of a self-learning process. Finally, the human monitoring and robot path planning for collaborative environments. In what ways can PICK-PLACE achieve progress beyond the state of the art?

In PICKPLACE there are two participants that will describe the demo scenarios based on their needs. These companies have identified a lack of commercial automated solutions for some of manual processes they have. This need is aligned with other E-commerce companies, as it can be contrasted with The Amazon Challenge.

In this competition organized by Amazon, universities and research centres are developing new solutions for an automated process of pick-and-place of random goods. The aim is to have new grippers and grasping technologies to automate random bin picking.

The results of this project are partially focused on solving this problem, designing and manufacturing a new multifunctional gripper with self-learning capabilities to optimize the grasping. Moreover, a safe collaborative environment offered by means of human monitorization and adaptative path planning.

What is your view regarding pick and place in your area?

The demographical context in the Basque Country, where the work force is reducing, will require more automation to handle many activities that are nowadays done by humans. One of the greatest challenges is to change the general opinion about robots and their interaction with humans.

It should be kept in mind that the tasks that are prone to automate are repetitive and have low added value. The automation of these tasks with low cadences could be done by collaborative robots in safe conditions, where the working environment is monitored and workers can share the same space. Additionally, more dexterous robots are needed, so they are more human-like. Self-learning and optimization can lead this change in the scope of adaptative grasping.

PICK-PLACE project’s developments could be useful to contribute to a change in society’s general view of robotics. Disseminating the results can help to change the general opinion about robots in some working environments, where tasks are still performed manually.