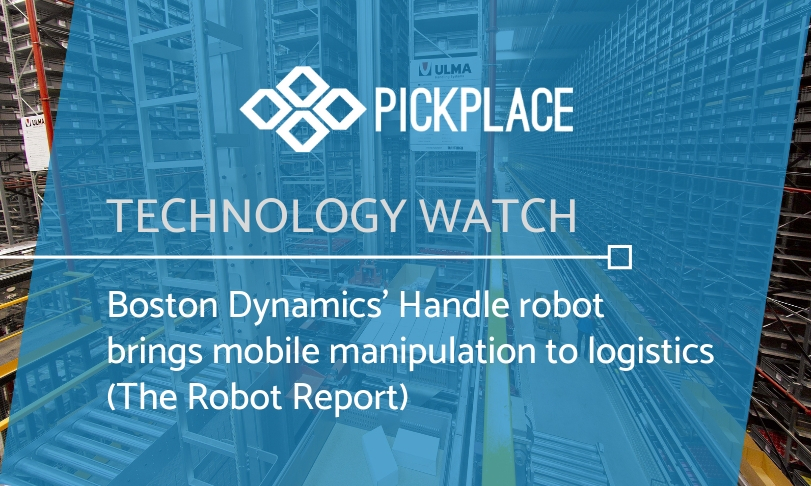 Handle uses an on-board vision system to track the marked pallets for navigation and finds individual boxes for grasping and placing. Handle had two arms when it was introduced in 2017. But in the new video it only has one arm, but can still easily lift and move the boxes thanks to a suction gripper.

“When Handle places a boxes onto a pallet, it uses force control to nestle each box up against its neighbors,” Boston Dynamics said. “The boxes used in the video weigh about 5 Kg (12 lbs), but the robot is designed to handle boxes up to 15 Kg (30 lbs). This version of Handle works with pallets that are 1.2 m deep and 1.7 m tall (48 inches deep and 68 inches tall).”

Boston Dynamics will be exhibiting at Promat, which takes place April 8-11 in Chicago, in Booth S3347a. It’s unclear if Handle will be in attendance, but Boston Dynamics doesn’t typically exhibit at trade shows.

During his keynote at the Robotics Summit & Expo in May 2018, produced by The Robot Report, Boston Dynamics founder Marc Raibert alluded to a new application for Handle coming in 2019. Perhaps this is it.

Getting a Handle on practical applications

Warehouse workers probably won’t have Handle as a colleague anytime soon, we’re guessing, due to cost and efficiency. But it’s great to see Boston Dynamics develop Handle with an application in mind. That, of course, has been the knock on the company over the years. But since it was acquired by SoftBank in mid-2017, Boston Dynamics appears to be more application-conscious.

Take SpotMini for example, the company’s beloved quadruped robot that is being commercialized in 2019. This is the first robot Boston Dynamics will commercialize in its 27-year history. And we recently saw SpotMini inspecting construction sites in Japan, providing insight into potential real-world applications.

Raibert said at the Robotics Summit that it’s a challenge to balance both Boston Dynamics’ short- and long-term goals. The long-term goal has been solving “the hard problems in robotics, leading to major new functionality.” Its new goal is developing products for real-world applications. Handle seems to fall into that category.

Here’s the original version of Handle, by the way. We will reach out to Boston Dynamics for further information.