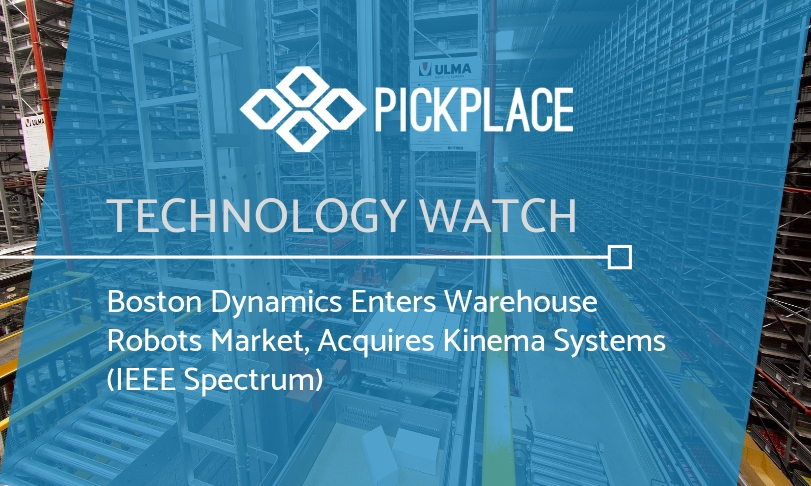 The company, famous for agile machines like Atlas and Spot, wants to unleash robots in the warehouse Photo: Boston Dynamics / All your boxes are belong to us! Handle loves a pile of boxes, and it’s pretty good at moving them too.

If you haven’t seen the latest Boston Dynamics video, released last week, it shows an upgraded version of the company’s Handle robot moving boxes in a warehouse. Handle is a mobile manipulator that integrates both legs and wheels, and the new version features a swinging “tail” that serves as a counterweight and allows the robot to balance and move in a dynamic fashion—just as you’d expect from the company that created such nimble machines as Atlas, Spot, and BigDog.

Boston Dynamics, which SoftBank bought from Google in 2017, is showing off Handle toiling in a warehouse for a reason: The company is officially entering the logistics market, with plans to offer robots for material-handling applications. As part of that strategy, it is announcing today the acquisition of Kinema Systems, a startup based in Menlo Park, Calif., that develops vision sensors and deep-learning software to enable industrial robot arms to locate and move boxes.

Boston Dynamics founder and CEO Marc Raibert says the two Handle robots seen in the video aren’t moving as fast as they could, and one of the factors limiting their performance is their vision systems. “We’d like to speed up our robots, and the Kinema system is going to let us do vision a lot more effectively,” he tells IEEE Spectrum.

The Kinema acquisition will also establish a Silicon Valley outpost for Boston Dynamics, headquartered in Waltham, Mass. The plan is to expand the team at the new location, focusing on robotic products for logistics, as well as developing deep learning and vision technology for Boston Dynamics’ growing family of robots. (The company is hiring at both locations.)

Handle is the latest robot platform that Boston Dynamics has added to its portfolio. While the original design combined hydraulic actuators and electric wheel drives, the new Handle is an all-electric machine. A single manipulator with a vacuum gripper replaced the two arms from the initial design. And then there’s the counterbalancing tail, which helps the robot reach higher and farther than it would otherwise.

“We’d like to speed up our robots, and the Kinema system is going to let us do vision a lot more effectively” —Marc Raibert, Boston Dynamics

Handle follows Atlas, developed primarily as a research platform for exploring highly dynamic behaviors, and Spot (formerly SpotMini), designed as a general-purpose platform that will allow users to integrate their own software and hardware and come up with new applications. (The company’s plans for mass producing Spot are moving forward, with about 40 “beta” robots currently undergoing tests before production starts in the summer.)

“Handle is unique in that it’s the first time that we’ve really started looking specifically at one task in one industry,” says Michael Perry, vice president of business development at Boston Dynamics. “We’re really trying to look at how we can enter into a warehouse and start moving boxes around.” He emphasizes that the plans for Handle, as with other Boston Dynamics robots, is “not designing a robot for a robot environment, but a robot that can go into a human environment.”

This is where Kinema comes in. The team behind the company includes veterans from top robotics labs like Willow Garage and SRI, where they helped develop popular open-source software for robot perception and manipulation, including MoveIt! and ROS Control. The Kinema system relies on fixed cameras mounted over pallets of boxes. The images are fed into an application that can self-calibrate and identify individual boxes, even if they are tightly packed or deformed, or when lighting conditions are challenging. The system then guides a stationary robot arm to plan and execute picks.

“Boston Dynamics’ reputation for innovation fits perfectly with our mission of developing the next generation of vision-enabled warehouse robots,” Sachin Chitta, founder of Kinema Systems, said in a statement.

Raibert says other vision systems they looked into require significant training until their deep-learning algorithms work reliably—you have to show it lots of pictures of all the different types of boxes, and repeat the process if your warehouse changes. Kinema’s system, on the other hand, “is able to generalize well enough so the robot is able to move through a wide variety of pallets and products,” he says.

Boston Dynamics will continue selling the Kinema system, called Pick, which customers can integrate with commercial robot arms from suppliers like ABB and Yaskawa. But in the near future, Boston Dynamics also wants to deploy mobile robots like Handle to help with the boxes and pallets. Of course, the biggest question is whether Boston Dynamics can prove that a complex robot like Handle can be cost-effective in comparison to more conventional types of automation. Perry, the VP for business development, says revamping large warehouses to support fixed automation is costly, and many facilities are retail-type warehouses that can’t easily be modified. “You need something that is able to go through existing spaces and grab boxes,” he says, “and right now there’s no robot that is able to do that like Handle.”

That said, Handle’s design is not final. After the integration with the Kinema system and trials with customers, Boston Dynamics may modify the robot based on a new set of requirements and trade-offs. Raibert is not prepared to talk about the design directions his team might contemplate. But he says he’s looking forward to it.