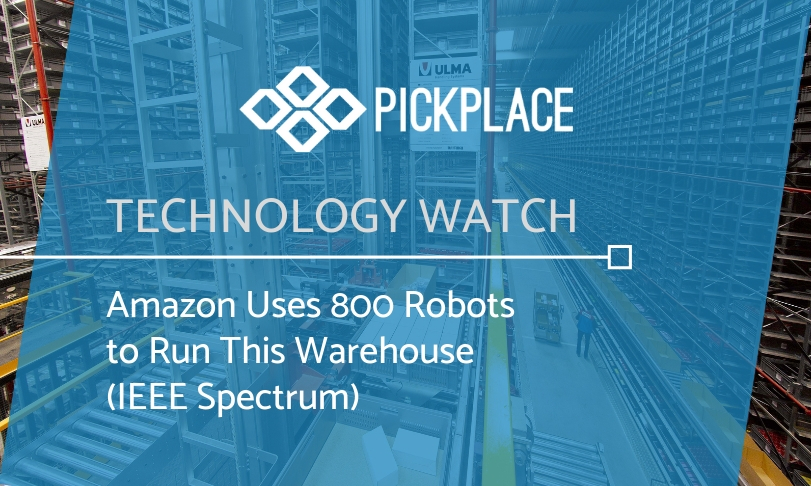 Xanthus, one of two new robots Amazon unveiled today, can be equipped with different modules like conveyor belts and stacks of bins to perform a wide variety of tasks. Photo: Amazon

At Amazon’s re:MARS conference in Las Vegas today, who else but Amazon is introducing two new robots designed to make its fulfillment centers even more fulfilling. Xanthus (named after a mythological horse that could very briefly talk but let’s not read too much into that) is a completely redesigned drive unit, one of the robotic mobile bases that carries piles of stuff around for humans to pick from. It has a thinner profile, a third of the parts, costs half as much, and can wear different modules on top to perform a much wider variety of tasks than its predecessor.

Pegasus (named after a mythological horse that could fly but let’s not read too much into that either) is also a mobile robot, but much smaller than Xanthus, designed to help the company quickly and accurately sort individual packages. For Amazon, it’s a completely new large-scale robotic system involving tightly coordinated fleets of robots tossing boxes down chutes, and it’s just as fun to watch as it sounds.

Amazon has 800 Pegasus units already deployed at a sorting facility in the United States, adding to their newly updated total of 200,000 robotic drive units worldwide.

If the Pegasus system looks familiar, it’s because other warehouse automation companies have had something that’s at least superficially very similar up and running for years. Pegasus is one of Amazon’s new warehouse robots, equipped with a conveyor belt on top and used in the company’s sorting facilities. Photo: Amazon

But the most interesting announcement that Amazon made, kind of low key and right at the end of their re:MARS talk, is that they’re working on ways of making some of their mobile robots actually collaborative, leveraging some of the technology that they acquired from Boulder, Colo.-based warehouse robotics startup Canvas Technology earlier this year:

“With our recent acquisition of Canvas, we expect to be able to combine this drive platform with AI and autonomous mobility capabilities, and for the first time, allow our robots to move outside of our robotic drive fields, and interact collaboratively with our associates to do a number of mobility tasks,” said Brad Porter, VP of robotics at Amazon.

At the moment, Amazon’s robots are physically separated from humans except for one highly structured station where the human only interacts with the robot in one or two very specific ways. We were told a few months ago that Amazon would like to have mobile robots that are able to move things through the areas of fulfillment centers that have people in them, but that they’re (quite rightly) worried about the safety aspects of having robots and humans work around each other. Other companies are already doing this on a smaller scale, and it means developing a reliable safety system that can handle randomly moving humans, environmental changes, and all kinds of other stuff. It’s much more difficult than having a nice, clean, roped-off area to work in where a wayward human would be an exception rather than just another part of the job.

It now seems like Canvas has provided the secret sauce that Amazon needed to start implementing this level of autonomy. As for what it’s going to look like, our best guess is that Amazon is going to have to do a little bit more than slap some extra sensors onto Xanthus or Pegasus, if for no other reason than the robots will almost certainly need more ground clearance to let them operate away from the reliably flat floors that they’re accustomed to. We’re expecting to see them performing many of the tasks that companies like Fetch Robotics and OTTO Motors are doing already—moving everything from small boxes to large pallets to keep humans from having to waste time walking.

Of course, this all feeds back into what drives Amazon more than anything else: efficiency. And for better or worse, humans are not uniquely good at moving things from place to place, so it’s no surprise that Amazon wants to automate that, too. The good news is that, at least for now, Amazon still needs humans to babysit all those robots.