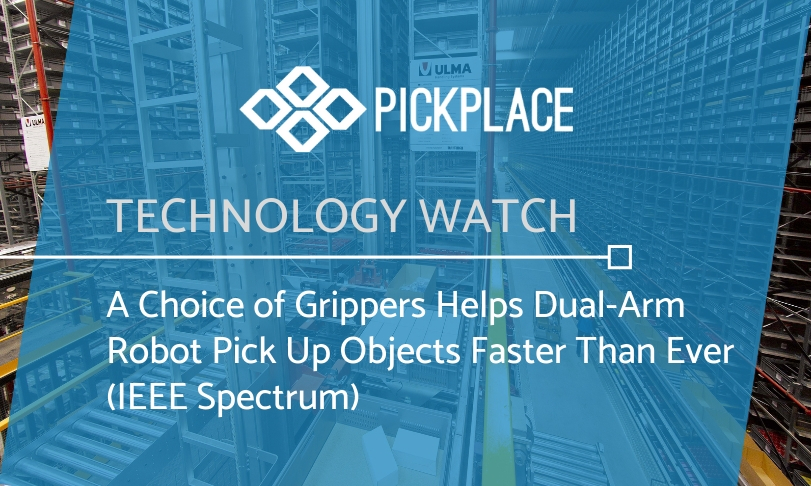 Dex-Net 4.0 enables “ambidextrous” robots to choose the best gripper for the job. We’ve been following Dex-Net’s progress towards universal grasping for several years now, and today in a paper in Science Robotics, UC Berkeley is presenting Dex-Net 4.0. The new and exciting bit about this latest version of Dex-Net is that it’s able to successfully grasp 95 percent of unseen objects at a rate of 300 per hour, thanks to some added ambidexterity that lets the robot dynamically choose between two different kinds of grippers.

For some context, humans are able to pick objects like these nearly twice as fast, between 400 and 600 picks per hour. And my guess would be that human success rates are as close to 100 percent as you can reasonably expect, perhaps achieving 100 percent if you allow for multiple tries to pick the same object. We set a very, very high bar for the machines. Part of the reason that we’re so good at picking (and at grasping in general) is that we have a lifetime of experience with the shape and size and weight of objects, the frictional properties of different materials, and how things are likely to deform when we touch them. Without even consciously thinking about it, we’re able to generate detailed models in our head that help us grasp and pick up unknown objects with ease. Robots, though, don’t have access to the same experiential world model that we do. Instead, they rely on task-focused learning, which is where Dex-Net comes in. Dex-Net learns how to grip things by training through simulation, using millions of synthetic depth images of 3D objects along with slightly randomized physics in order to better translate simulation success to real-world success. This artificially introduced uncertainty helps the system manage things like sensor noise and small shifts in robot calibration over time—you can probably get more realistic results by doing the training on real robots, but that means you’re constrained by things like having lots of real robots and time for them to do their thing, and who wants to wait around for that?

What makes Dex-Net 4.0 unique is that the grasping policies that it develops are “ambidextrous,” in that a two-armed robot can decide to use one of two arms. But unlike ambidextrous humans, this particular robot has a different gripper on each arm: a two-fingered gripper that can do a pinch-grasp, and a suction gripper. Based on an estimate of grasp quality, Dex-Net chooses which gripper will most reliably pick up the target object. This technique leads to very quick, very reliable grasping: The ABB YuMi in the video above can pick about 300 previously unseen items per hour, with a success rate of 95 percent. And Dex-Net is expandable to other gripper types as well. With additional training (and more arms for your robot, optionally), you could generate grasping options for electrostatic grippers, five-fingered hands, gecko toe grippers, or anything else you can come up with.

Of course, it’s always interesting to look at the 5 percent of cases where the robot wasn’t able to grasp successfully, and here are some examples of them:

The first picture shows “adversarial” objects, which are particularly difficult to grasp because of “adversarial geometry, transparency, specularity, and deformability.” Dex-Net only successfully grasps these objects 63 percent of the time, although when the system is empowered to remember previous failures and nudge things around a bit if it can’t find a good grasp, its reliability improves to 80 percent.

The second picture shows object that Dex-Net 4.0 can’t grasp at all, “due to reflectance properties such as transparency, which affect depth sensing, and material properties such as porosity and deformability (e.g., loose packaging), which affect the ability to form a vacuum seal on the object surface.” We should note that the grippers (and training for the grippers) doesn’t incorporate things like force sensing or tactile sensing, so there are still options for failure recovery that haven’t yet been explored.

It’s also worth considering whether there’s a point at which sub-100-percent accuracy becomes acceptable. There are many realistic ways of managing pick failures: You could have the robot pick everything it can out of a bin, and then send the remainder to a human picker to deal with the tricky items, for example. Or perhaps at some point it’ll make sense for packaging to be tweaked so that items that are consistently difficult for a robot to see or grasp are made more robot friendly. Either way, it’s definitely more of a “when” thing than an “if” thing, and there’s so much incentive for the supply chain to be increasingly automated that the “when” is likely to be very, very soon.