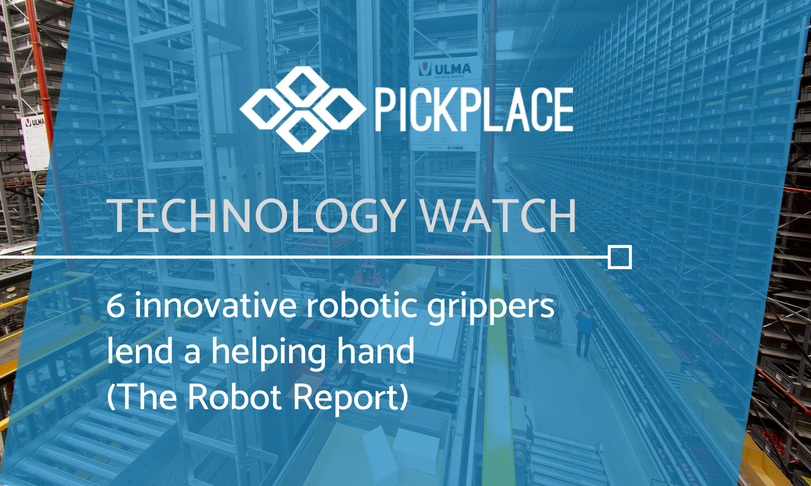 With the collaborative robot market exploding, robotic grippers will be an area of growth and increasing competition. That was made abundantly clear at Automatica 2018 where new robotic grippers made quite a splash.

While market growth has an impact on the amount of innovation taking place, Lasse Kieffer, CEO and co-founder of Purple Robotics, said a shift in mindset is also leading to new robotic grippers.

“End users want a collaborative robot application. You can’t make that if only the robot is collaborative,” said Kieffer. “Everything in the system needs to be collaborative, including the gripper. Until now, everyone’s been focused solely on the robot being collaborative. This is the trend in the market, but ISO standardization is also going from looking at features on the robots to the grippers because they might come into contact with the people.”

While robotic grippers are improving, there’s still a long way to go before they scratch the surface of being anywhere near as capable as human hands. And one size doesn’t fit all. An exec from Daimler AG spoke about how Mercedez Benz has about 50 robots that require at least 500 different grippers to perform all their tasks.

Here is a recap of innovative robotic grippers The Robot Report encountered at Automatica 2018.

The newly-formed company OnRobot was a big hit at Automatica. Located next to Universal Robots (UR) booth, the company combined the work of Perception Robotics (US), OptoForce (Hungary), and OnRobot (Denmark). Automatica was the company’s coming-out party with three grippers and an upgraded force torque sensor. The merger could signal the rise of another Denmark-based robotics powerhouse.

OnRobot CEO Enrico Krog Iversen foresees building an entity where everything that goes on a robot can be acquired from OnRobot with a single intuitive user interface.

“Collaborative robots have the potential to become the comprehensive standard in industrial automation,” said Iversen, the former CEO of UR from 2008-2016. “We want to unleash this potential by making collaborative applications even easier to implement and to carry them into completely new applications – that is the idea behind all our new products that we are presenting here at Automatica.”

The Gecko Gripper, developed by Perception Robotics, was inspired by nature, applying a similar adhesive system for gripping as the feet of a gecko lizard. Fine fibers adhere to the surface of an item to generate a strong grasp. The gripper is compatible with UR and Kawasaki robotic arms. OnRobot licenses a concept originally developed by NASA Jet Propulsion Laboratory and brought the Gecko Gripper to market.

The Gecko Gripper was one winner of the International Federation of Robotics Innovation and Entrepreneurship in Robotics and Automation (IERA) Award. OnRobot said the Gecko Gripper will work well perforated or porous objects that are typically troublesome for vacuum-based grippers to manipulate.

The Polyskin Tactile Gripper, also developed by Perception Robotics, is a two-fingered gripper. The fingers can be individually aligned and have integrated tactile sensors in the fingertips. This allows the gripper to precisely measure the condition of the surface of workpieces and align its gripping processes accordingly. The Polyskin Tactile Gripper is also compatible with UR and Kawasaki.

The RG2-FT, a variation of OnRobot’s original RG2 gripper, has integrated force torque sensors and a proximity sensor, that accurately detects the condition of objects. OnRobot said the gripper detects the danger of objects slipping before it happens, making handling safer. The RG2-FT is compatible with UR and KUKA.

Purple Robotics is another new gripper company that has ties to UR. The Odense, Denmark-based startup was founded by a team of “three super nerds” that have a combined 18-plus years experience developing the UR3, UR5 and UR10 robots. Along with Kieffer, the Purple Robotics co-founders include CTO Peter Nadolny Madsen, and COO Henrik Tilletz Hansen.

Purple Robotics is offering the PR10, an electrical-based vacuum gripper that doesn’t require an external air supply. The PR10 features an internal air supply with an airflow that is self-contained, according to the company. It also offers two individual vacuum channels that can use simultaneously use different suction power and lost grip detection.

So not only does the PR10 eliminate external air hoses, Purple Robotics said it’s more energy efficient than traditional vacuum grippers. Purple Robotics claims the PR10 can be up and running in about 30 minutes with no prior training, which would reduces both the cost of implementation and changeover time between production lines.

The PR10 was quite heavy. It has a payload up to 10kg and costs about $4700 (€4000 Euros). Kieffer said the built-in pump is a major benefit, but it’s something that could be done before. He said, however, building a customized electrical-based pump that fit into a robot can be time-consuming, whereas the PR10 is an off-the-shelf solution with plug-and-play capabilities.

Kieffer said Purple Robotics has patents pending on the gripper and its tool changer. At press time, Purple Robotics already signed two U.S. distributors, Olympus Controls and Thinkbot Solutions, and expected to add nearly half a dozen more for coast-to-coast distribution in the US.

Since UR owns the majority of the cobot market, at the moment the the PR10 is specifically designed to be used with UR arms. Kieffer said the interface is generic to fit other robots in the future, but there’s no plans for that yet.

Purple Robotics is already included in the UR+ program of third-party robot accessories. In this partnership, Purple Robotics joins more than 77 industry-leading developers of robotics software, accessories, and end-of-arm tooling that share a sales channel with UR.

Schmalz also makes an electrical-based vacuum gripper that is part of the UR+ family called the CobotPump ECBPi. The CobotPump is customized to work with UR cobots and is available as a SIO-Link version without the URCap.

“The PR10 is a one-size-fits-all setup that eliminates the barrier to entry that is typically caused by customers’ unfamiliarity with pneumatics,” said Nick Armenta, automation engineer at Olympus Controls. “Existing vacuum systems need custom design and usually at least five different parts, sometimes from different sources. A single package that can be bought off-the-shelf and quickly deployed without any engineering is a huge benefit for the customers.”

As for the company name, here is its explanation: “not only is purple a beautiful color, but it is a color that takes courage to use. We often get the question “why is your company name Purple?” We want people to remember us, and we want to make a difference by doing things differently.

“We wanted to create a product that fits any manufacturer’s needs and allows them to start production faster,” said Robotiq CTO Jean-Philippe Jobin. “Hand-E comes with a 3-fingertip kit so automation engineers can easily integrate the gripper in their application. Its compact and ergonomic shape makes collaborative robot hand-guiding safe and easy.”

There are two major differences with Hand-E: its high accuracy and 50mm parallel stroke are well-suited for precision assembly tasks, while the 2F-85 and 2F-140 excel at manipulating bigger items. And Hand-E’s sealed design
ensures reliability in the tough conditions. Robotiq said Hand-E can be set up in 10 minutes.

The qb SoftHand Industry is a soft robotic hand designed for industrial applications. It’s based off the company’s SoftHand Research gripper that was built for the educational sector. At first glance the SoftHand Industry resembles the Shadow Robot Dexterous Hand, but it only has one motor and each finger can’t be individually controlled. qb said this reduces the cost, but because it’s made of soft materials, the hand is deformable to the objects it’s grasping.